Latest Update
You are at:Home»Windows»How to Download and Install Microsoft Windows 10.
Hello TechNews365.info Community , Hope you are fine. 2014/9/30 Microsoft officially released the next version of “Windows 10” ( skip Windows 9 ), across the PC, phone, tablet and XBox … and so on multiple platforms, and provides users a free Windows 8 Upgrading an attempt to restore the confidence of users of Windows.

2014/9/30, Microsoft officially released the latest Windows 10 Technical Preview (Technology Preview) image files for users to free download, currently only available in English in three languages, both 32 and 64 bit versions, to early adopters Readers can follow the my other post together with VirtualBox to install a play and see!

How to Install Windows 10 technical preview version in Virtualbox Sept by Step.
Back in 2012 before the launch of Windows 8, Microsoft has released a preview version for users to free download and use virtual machines to play the latest Windows 8 preview version of it , but after the Windows 8 and Windows 8.1 in two versions, many users still a soft spot for Windows 7, has been reluctant to upgrade to Windows 8 / 8.1, one is Windows 8 user interface with the traditional Windows 7 is really too different ( even the signs of the Windows Start menu is gone), and secondly, is the real use of the touch screen, stylus electricity or Windows tablet very few people, plus Windows 8 software compatibility issues, and therefore choose not to upgrade to use were still in the majority.
2014/9/30 Microsoft has finally officially announced the next version of Windows 8.1 in the “Windows 10” because the emphasis on the new system across PCs, phones, tablets and XBox … and so on multiple platforms, considered a major leap forward, so it deliberately skip Windows 9 directly into Windows 10.
Three dyes ago, Microsoft has finally released a technical preview version of Windows 10, and users are free to download and install, but unfortunately has not been announced positive body English version, following a positive step to describes how to download and install Windows 10.

2. Next you need to use Windows Live ID for login.

3. In “Terms of Use” screen by pressing the lower right corner of the “I Accept” to enter the get the ISO File page.

4. In this page pressing the under of  the “Get the ISO file” to enter the download page. 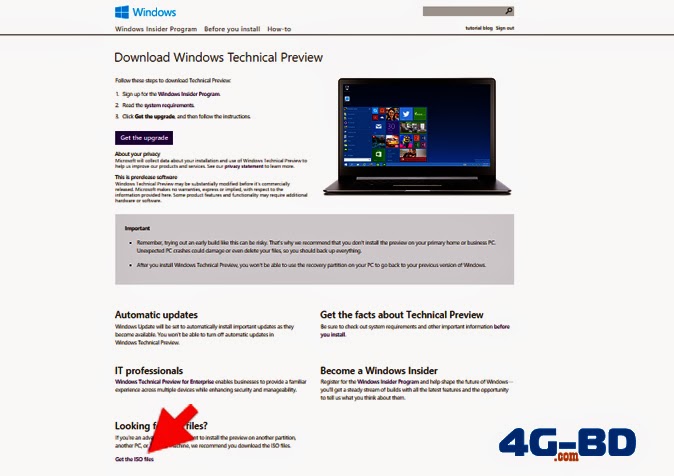